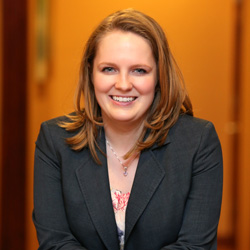 Lauren Ray is our Communications Specialist at WorthWhile Wealth Council. At the firm she participates in all forms of communicational work, including: event planning, client services, social media work, web work and internal operational tasks.

Lauren grew up in Knoxville, TN but moved to Lynchburg, VA in 2004. She later graduated from Jefferson Forest High School a few years later and moved on to attended Liberty University; graduating in 2011 with a visual communications degree in Graphic Design. Upon graduation, Lauren started a small graphic design business. Previous jobs also included employment working at a summer camp, an ice skating rink and a dog grooming salon. Although these positions were each very different they helped to confirm her desire and aspiration to work with people and sharpen her communication skills.

After a decade in Virginia, Lauren found she missed Tennessee and relocated in 2014. She now lives in Johnson City with her husband Jordan and their dog Theodore “Theo”. In her spare time Lauren enjoys spending time with friends and family, drawing, and sewing projects.