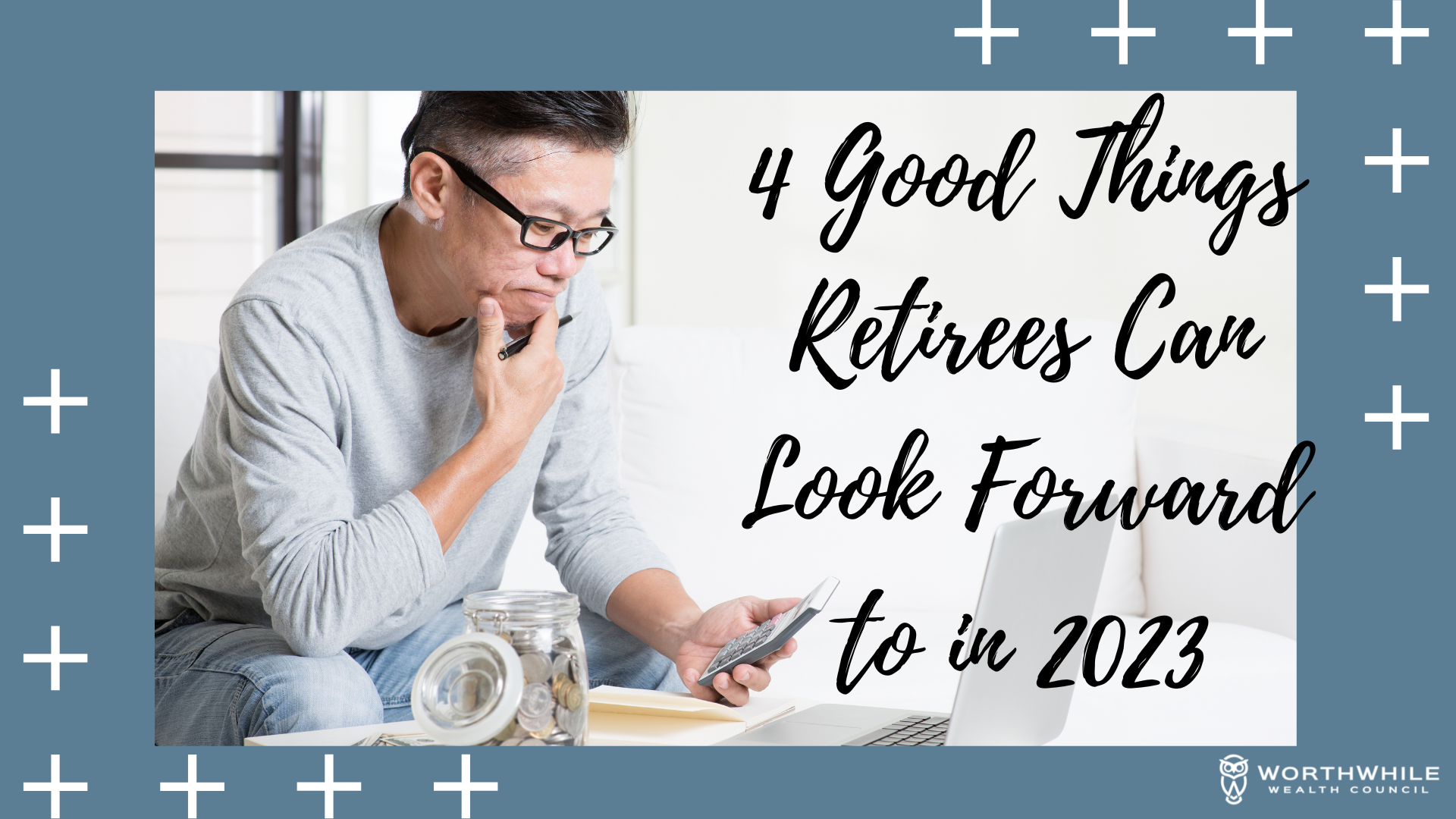 4 Good Things Retirees Can Look Forward to in 2023

Here are four things people approaching or already in retirement can look forward to in 2023.

If you’re on Social Security, you can expect your check to increase by 8.7% in January. It’s the biggest cost-of-living adjustment in four decades. That’s equivalent to an extra $147 a month on average in your pocket.

Of course, there’s a reason for the record cost-of-living adjustment (COLA) — inflation. The price of everything from groceries to housing keeps going up, so an extra 8.7% might not seem like much.

If inflation starts to decline next year, retirees still benefit from their bumped-up Social Security checks — at least until the new COLA is calculated in October 2023.

In December, you can see what your exact Social Security increase will be next year.

Medicare beneficiaries will pay less for their Part B premium next year, the first decrease in a decade.

That means more money in your pocket, which is welcome news during high inflation.

Looking to retire in the next couple of years? You’ll get to enjoy increased retirement account contribution limits in 2023.

Prompted by runaway inflation, the IRS is ratcheting up 401(k) and individual retirement account (IRA) contribution limits faster than ever.

Interest rates keep rising as the Federal Reserve attempts to clamp down on inflation.

That makes it more expensive to take out a mortgage or car loan, but higher interest rates are great if you’re saving money.

Many retirees want a safe place to park their cash. Maybe you’re selling your home to downsize and don’t want to risk putting the proceeds in the stock market. Or maybe you’re taking required minimum distributions from your retirement accounts — and don’t mind earning some interest with a safe investment.

Next year is shaping up to be a great year for saving money. The interest rates on high-yield savings accounts, money market accounts and certificates of deposit are higher than they’ve been in years.

Consider this: Many high-yield savings accounts are boasting interest rates of 3% and higher. In 2021, you were lucky to get 1.5%

CDs are also enjoying higher rates, especially at online financial institutions. The average rate for a one-year CD was about 1.1% at traditional banks in November 2022 and as high as 3.75% at online banks and credit unions.

Savers have another tool in their toolbox: Series I Bonds from the federal government.

I bonds are one of the safest investments you can buy. They’re indexed for inflation and the variable rate resets every six months.

The overall rate is down, but there’s a silver lining. On Nov. 1, the Treasury Department announced a new fixed rate of 0.4%, the first time it’s been over 0% since May 2020.

If you buy an I bond from the U.S. Treasury Department between now and the end of April 2023, you can lock in that 0.4% fixed rate over the life of your bond — and it will be calculated in addition to whatever the variable inflation rate is in the future.

I bonds can be a solid way for retirees to protect their cash against inflation. You can purchase up to $10,000 of I bonds each calendar year.

You have to hold them for at least a year, and you’ll lose three months worth of interest if you cash out your I bonds one to five years after purchase.

High inflation has been challenging for many retirees in 2022, but there’s good news on the horizon.

If you’re trying to protect your nest egg against rising costs, it makes sense to speak with a financial adviser or other professional who can help you create a personalized strategy.